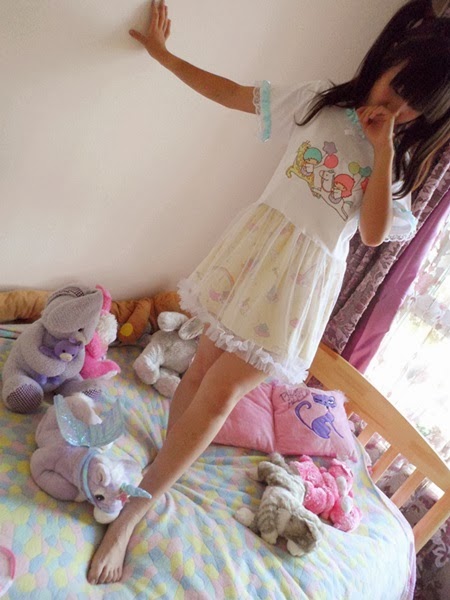 This is a topic that I’ve come back to during the period where I first started finding out about what being a little, specifically a little girl from a post childhood, adult position was researching it, joining, watching sites go or even deciding they were not where I was at personally.
That is why this subject of the labelling with associated issues of defining what being an adult little girl is and how that compares to that of being a sissy is an important thing for me.

I feel a little perspective is called for and so I will start with something from my own childhood during those changing times of the late sixties and early seventies where as every girl and boy knew, “Sissy” was the term term for a boy lacking the perceived virtues of being a boy seldom been seen playing with insects, climbing trees, having adventures being generally speaking a very timid creature.  The generally held view was this was because of too much Mommy input even by people in authority such as Teachers.

That word he was called, “sissy” actually came from sister and was used to address what wasn’t there –his boyish virtues – rather than what he was and it was this he was taunted with in the street and on the playground not just by boys but girls rigorously in the way that junior girls only can with that cutting tone of voice as they despised him more than the boys.

What is understood in online sissy culture is the point of being 'sissified' is more around an exaggerated delicate kind of femininity more centred say on  being  'effeminate', 'prissy' or a 'mommy's boy' and is often portrayed in terms of his sexual inadequacies in satisfying a woman  and switching roles with her. They are staples of 'sissy training' and associate literature.
It seems to me that what is really going on there is just a grown up version of the little girls ganging up on him, taunting sexually the wimpy boy.

It ought to be noted ‘sissy girl’ really  is an oxymoron as a girl cannot be a sissy in those terms because she is a girl first and foremost and all these terms including ‘sissy girl’ were hurled at boys.

What I would say is over time because  many adult little girls had male pasts, some had become confused with sissified boys, a good number had accepted the term unquestionably to the point some had put the term ‘sissy’ in front of their first names.


There is a use of the term 'sissy' which is more around feeling more submissive which some may feel fits in with them. I have no issue with that, I just don't see the point in prefix your name in everyday online exchanges and the like.

There is a difference between effeminate and being feminine if one cares to get out ones dictionary and for me being an adult little girl has everything to do with my femininity rather than a lack of male virtues.

Contrast that to an Adult Little girl who loves the feel of her dresses and skirts, cherishes her dollies that she plays with, loves doing things with her hair plaiting it, putting on Alice bands or adores tiaras caressing your hair sharing it with all her little friends. Sharing is a big thing, so you share food, games and watch animated films together for hours.